This is a short story about an accident I had in my 40’s, and I’m writing to inform my surgeon who was going to operate in two weeks on my lower intestine, to remove 3″ from it, that has a phase #1 cancer growing on it, and it was to be done at Sloan Kettering Hospital in Manhattan.

I’m writing this to inform you  of something that happened to me  that I had completely forgotten about for over 40 years. While in a meeting this past week with my general practitioner, Dr Magliullo , we discussed the up and coming procedure that you and your team of Memorial Sloan Kettering  doctors were going to perform on my cancer. In the discussion we talked about some of the happenings I’ve had over the years, and I recalled an event that happened to me in 1973/4. We were at my  wife’s parents home celebrating our annual Thanksgiving Day meal, and my one year old son, Christian, was just learning to walk. As he did so, he was ringing and playing with a 6″ handheld Indian brass bell that was a sample of what I was importing at the time for the F.W. Woolworth Co. 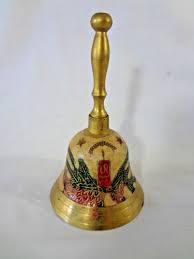 This bell is very similar to the one little Chris was holding, except the top of the handle came to a point.

After he was tired of playing with it, he left it upright on a chair that was not visible to any of us, as it was a corner chair under the dining room table that was also in a corner of the crowded room. Being so small Chris was able to walk under the table without hitting the top. Later, when the meal was to begin, I, being very agile, decided to sit at the table in that corner, allowing the rest of the family to easily be seated. So, without seeing the bell, I slipped around the side chairs, and raised my right foot over the back of the chair I was going to sit on and sat down with my butt landing directly on that bell. Needless to say, it went straight up into my body between my butt,my penis and my rectum. Shocked! I Jumped up flipping over the “already set” Thanksgiving table, and as I did so, I pulled out the bell which had gone completely inside me, and all the way up to the bell portion. Out came the bell and a lot of blood as well, panicking, I ran outside of the house bleeding through my pants and falling onto the grass, passed out. I was rushed to a local hospital, but by the time I got there my testicles had begun filling up with the blood that could no longer escape out the hole created by the bell, as it swelled, it closed. My testicle sack began filling to the bursting stage and eventually was the size of a football. The doctors at the hospital, could not decide how to proceed,  and they finally agreed it was best to let nature take it’s course. While I was still in the Emergency room, a bed was wheeled up beside mine, and as I turned to see who and what was happening, I saw my son Trey laying there, passed out cold. The person who wheeled him in said “He keeled over just outside in a faint, in the middle of the street,”

Afterwards, they moved me into a private room in the maternity ward and I was immediately put into a “Sits bath” to relieve the pain, and also allow my new football to float freely. I was there for two weeks as the swelling slowly subsided. At the end of that time, I was released with no further damage to my body. I was 40 years old and strong, and later just forgot about it. However, Dr Magliullo after laughing at my experience, brought up the point that there may be scar tissue in that area of the accident that might effect my operation.
I tell you this with a laugh, but at the time it happened it was not so funny as they make it out to be in the movies, with the people watching become hilarious. Also just to make you aware of  another incident before you operate on me. I have had no repercussion from that accident nor the one earlier when  I was 18.  I was working the night shift in a manufacturing plant that made giant co-axle cables used under the Ocean . My job was to apply a tremendous amount of electricity to try to destroy them and find out their limits on how much electricity that it could withstand. I did this each night and testing different sizes and shapes of cable that became boring, especially when the cable I was testing that night blew very early, leaving me with nothing to do the rest of the evening. One night when a cable blew early, I decided to roam around the plant to see just what was there. I came to an outside wall with very large windows, but they were high and hard to look out of. I notices a place that was higher off the ground and figured it was a good way to look out. Jumping onto it, the cover I landed on gave way as my right foot hit it, but not the rest of my body. What happened next was my crotch hit an edge of what I later found out was a ventilator shaft. When I hit it’s edge, it cut my left testicle in half but not the sack around it, causing the same football affect winding me into the local hospital. Here again no physical affects had changed any of my abilities, especially having children…I’ve had 3 sons. Both incidents happened and disappeared. this is just for your knowledge, and maybe a little laugh.