These are the original typewritten pages by Maryann Abbatte Bianco LaMura, on how she remembers her young life. and after reading them, I now realize that  her life growing up was  so similar to mine. So compare her version to mine on how we both saw life at an early age as we talk about the same places, but such different versions.

Because it’s not too clear, as it is only a camera  picture of the original pages. I’m rewriting it for clarity, but the originals are  best for you see.

Here’s to you Mare, your gone but not forgotten!   Here starts page 1

“Way Before Her Time”

I decided to start my story with the introduction of my mother, for if not for her I wouldn’t be.

Mom was born on February 21, 1903, named Louisa Marie Bianco. She was the second born, the first girl, after the first boy, who was named Salvatore. My grangparents, Aniello and Elisabeth Belloise Bianco, were Italian Imagrants who came over from Naples, Italy. They were from a small town in the mountains in the province of Avellino, where everyone knew everyone else. They traveled over the Atlantic Ocean on a large tanker ship, into Elis Island, to live out the American dream.

Grandpa had previously visited America, and started a horse and wagon meat delivery service. He then returned to Italy toElizabeth, who was fifteen years his junior, bringing her back to America along with his youngest brother,Dominic, who was entrusted to his care. This voyage, you could say was considered their honeymoon voyage, however, Grandma was already pregnant to her first child, a three week ordeal, with terrible conditions, but a bright future lay before them.

They lived in a tenement building, a cold water flat, five flights up, in little Italy, on Mulberry Street, right right across from St, Patrick’s Old Cathedral. Later, that is where Mom went to school and graduated with the best penmanship certificate.

My best recollection of this apartment, after walking  five flights up to get there, with all slate steps, and iron railings, you entered the kitchen, at one end stood a large grey stove that needed either wood or coal to burn, in order to cook and heat the place, a ice box, that was later replaced by a welcomed refrigerator, and three tiny bedrooms, called railroad rooms, and a living room. There were fire escapes, off the windows, where milk and butter were kept, in the winter to stay cold.  We also used them to cool ourselves in the summer. The bathroom facilities were at the end of the corridor, in the hall, next to another apartment. It was for everyone’s use on on that particular floor. It was dark and had slate floors that seemed unbearably cold in the winter. it was lighted with only a small bulb, a pull chain, a small window, a large tank that sat over your head in order for you to flush the toilet. There was no sink, just a nail protruding out of the wall that held cut up telephone pages and Sears catalogs, to be used as necessary yo used in place of the toilet paper we use today. Incidentally it made for good reading material.

The only place to bath was a large tub in the kitchen with a board on top of it, as a counter top. You had to heat the water on the stove in order to get a warm bath. the other means of washing was the sink. To wash cloths there was a washboard, or a ringer type washer that you worked by hand. To dry the cloths you, you hung them through the window unto a line that strung from one apartment to the other, in the middle of the building which never to get any sun. Many times the cloths would freeze up and were stiff when you took them in. When we visited Grandma’s house, we all slept together in one room, and because of my fear of going down the hall in the dark bathroom, there were many times I used the commode under the bed.

(The end of page 1) The original is below, good luck trying to read it, as I spent hours translating it, but it was worth it, as all in it was what I also experienced, but only with a boys view, as girls pee more and certainly don’t slide down those iron railings. read further down to the end. 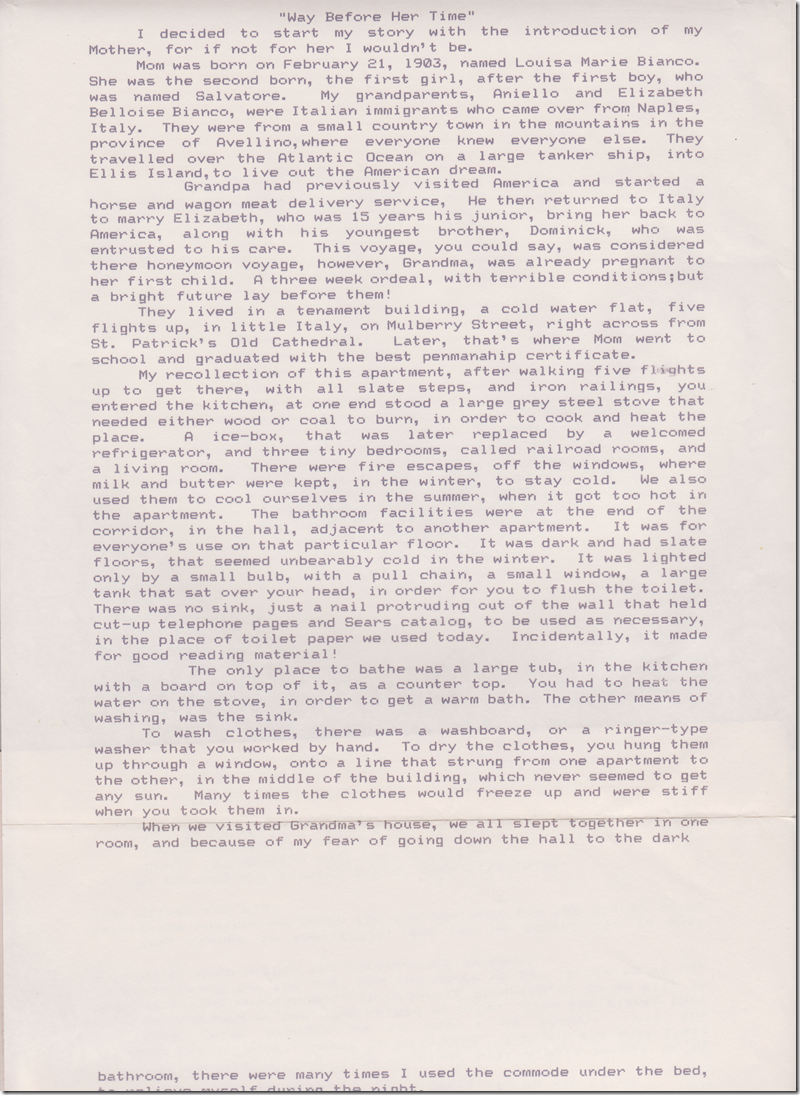 bathroom, there were many times I used the commode under the bed, to relieve myself during the night. (note: We all were frightened to death to go by ourselves in the night)

In the dark corridor, in the hall, there was a door that opened into a pantry where my grandparents kept all their staples, jams, jars of cooked peaches, tomatoes, pickles, olives, cheeses that hung from the ceiling, salamis and hams and everything you can imagine an Italian household would store; even the home-made wine that was made in the basement of the apartment by my grandfather and his six sons. Think of how it was to get those clothes clean.

When I was asked to retrieve some food from this pantry, I cringed, since it was so dark, and you could hardly see, except for a really small bulb that you had to reach up and pull the chain, in order to see. I never knew what was in there! I imagined all sorts of  mice, cobwebs and crawly things. However, as I grew up, I realized it was to be kept cold and dark for keeping the food from spoiling.

This was the home my mother was born into, where the door was never closed, and all were welcomed. As time went on, it became the home of six brothers and two more sisters. Nine in all that survived, and one who died in infancy.

There was no such thing as privacy. The girls were only looked upon only to help there mother with the chores of taking care of the others, cooking, cleaning, washing clothes, diapering, etc. The boys worked along with their father with the horses, stables, and wagons as soon as they were able, delivering the meat in the meat wagons.

After completing her school days, at the age of 13, Mom was pushed into a sweat-shop to become a seamstress. In the 1920’s sewing machines were run by a foot pedal. She worked 12 hours a day with no such thing as break-times; then went home to continue her chores, mainly taking care of the little ones. My grandmother always seemed pregnant, even when Mom was 23, after 10 pregnancies, another girl was born Amelia, and all Mom thought of was: why her father continuing to get her mother pregnant?  Was there any way out of this? All she knew was diapers, diapers and more diapers. Remember these were the ones you washed and hung out to dry to be used again.

At the age of 17, my grandparents felt it was about time to have men start to court my mom, of course when they had chosen. This consisted of Grandma sitting on the right, Grandpa on the left, the suitor sitting with his gifts on his lap, talking and partaking in the food and wine, as was the custom. The first suitor asked for her hand in marriage, but after two years of courting, Mom broke it off. The second suitor did the same, and again Mom broke it off. My grandparents were so frustrated, by this time my Mom was 23 years old, and their oldest daughter.

During this time Mom was offered a position with the head designer in her shop. Her talent was not unnoticed. She was able to cut, sew, and design negligees  better, faster than anyone in the shop. This was time my father-to-be came into her life. He was a shop foreman in the same building, and also worked part-time as a cab driver in N. Y. C.  He was handsome, debonair, and definitely a casanova! He was attractive to my mothers beauty, how she carried herself, and her strong temperament and her feistiness.

On their first date, Mom got out of the house, telling her parents that she and her sister were going to church. She got permission to go, and met my father at a silent movie theater and watched Rudolph Valentino. As the movie progressed he reached over and kissed my Mom. How dare he! That was when my Mom knew he was the man for her. He was bold, knew what he wants and went after it. She was ready to bring him home, however, he was Sicilian. Ih those days, anyone born out of your province was taboo in the family. A sicilian was considered an african, since sicily was not the mainland. She did not know how he would be received, However, since they were both determined, he was accepted by her parents, but my Grandfather gave them an ultimatum that they were to be married in six months. I guess they were afraid that my Mom would change her, or this Sicilian would be gone. But this was not to happen. Dad showed himself to be upright,steady,dependable, and they married two years later, on december 21st, 1928. Mom was now 25 years old.    The details of her wedding day were all sad ones.  She started to have second thoughts and was deathly afraid of getting married and having children. It means more babies, and sex, was a dirty word. But this time with all the pre-marriage arrangements, she could not renege. Their honeymoon took place on a train going to Niagara Falls N. Y., a place where all couples went to. A frightened Virgin, with no-one to explain to her what was to happen, and especially afraid of getting pregnant. She cried for two days and two nights. However, after much patience, love and understanding and perseverance, I was born May 9th 1930, I was one month premature,healthy, and a girl!

They took an apartment in Flatbush  in Brooklyn, near dad’s family, and Mom continued to work. they put me into a nursery which I vaguely remember, a high metal crib in a large room that seemed bare. It’s what we call a day-care center today. Two years later my sister Elizabeth was born on April 13th, 1932. She joined me in the nursery and hated it. our parents would pick us up after work. I remember the only sun we would see. is when the caretakers would take us up onto the roof to play. It costs my parents fifty cents a week for both of us and food. Mom continued to work for it was during the pot-depression years. Dad decided to apply for a position at the post office. with addresses, streets cities and states that were to be memorized. With his eyes blind folded, he would try to place the envelope in the correct box it was amazing to watch him. I was told never to bother him while he was studying, so my sister and I kept very quite around him. It was a happy when he passed the test with flying colors. He eventually was given the highest position in the state, other than the postmaster. Yes, Mom had been right, she could see his potential. He knew what he wanted and went after it!