I’ve been wondering if you still have an interest in “MADE IN AMERICA”? From 1992 through 1996 I made an attempt to get American manufacturers to realize that they needed to protect their businesses by showing retailers that they could compete against China. I failed at the attempt as all felt no threat from China at that time. I spent nearly a half million dollars in the attempt, since I felt I was one cause of what was happening in America.

From 1967 till 1998, I had established my own small offices in Hong Kong; Taipei, Taiwan; Manila, The Philippines; Seoul, Korea; Bangkok, Thailand; and finally Shenzhen, China. I first represented the F.W.Woolworth Co. as their buying agent in Asia, but as other retailers saw what I was offering, they too, came on board. Soon I had J.C. Penny Co, Montgomery Wards, Wal-Mart, and The Home Depot as customers and eventually two American Lighting manufacturers as customers as well.
I actually was one of the first Americans to enter into China while there was still a ban for us to travel there. This is a story in itself, but that’s for another time. In 1994 I realized that most American retailers as well as those in Europe were purchasing more and more from China. Most of them were sending over to China their experts to teach those small manufacturers how to produce their products. It was then I realized what was happening, and then formed a company called “Made in USA”. I had to add another name into it to make it legal called “THE WHITE KNIGHT /Made in USA”. I then went around the US trying to convince small Manufacturers to change their way and fight back, but it was to no avail as each thought I was wrong and that it could never happen. One was a large Light bulb manufacturer based in New Jersey. Today they don’t even exist. So, all I did was waist my money, as no one listened, or believed me.
The adventures I had throughout Asia were exciting and dangerous, and I would like to visit with you to tell you about them and to try again to get American manufacturers to fight back and do what made this country so great. It’s the retailers who are at fault, as they have increased their profits by buying from Asia, but have not passed on the savings to the American consumers. There is a simple answer to our import problems and that too I’d like to explain.
Something that might interest you, I knew Martha Stewart when she and I were first starting out in the early sixties, and true story about what she did to me. Nothing really bad for the times we lived in then, but it did set her on the growth as a person who supposedly “Knows everything about everything”, especially stealing! I’ve enclosed a business card that I created in 1994 to sell the Idea of “Made in USA”. I went through the trouble of getting a special address from the US post office for “Made in USA” as- Main St, USA. Not bad! But it didn’t work, and look us now, we’re umpteenth below Europe in everything, but more importantly, almost everything we buy is “Made in CHINA”. All we have to do is change one thing and you, Ms. Sawyer, personally can do it, cause of your influence in American thought. I can also tell you why the Chinese government is not concerned about America’s huge debt owed to China. All my knowledge is from 32 years of actual hands on experience… Try me, as it can’t hurt for a reporter such as yourself to listen!
Thank you for your time and hopefully we’ll meet soon.
Sal A. Bianco Jr,
The White Knight 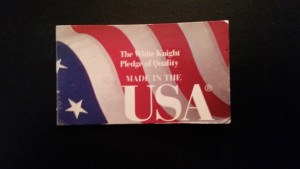 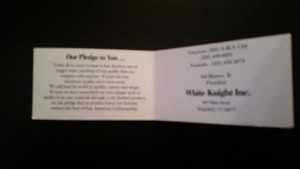 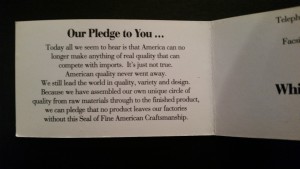 After this letter, I became involved in the process of moving back to New York, so I didn’t follow it up. I may have received a communication from Ms Sawyer, but since I no longer lived at the address I had in Florida, I wouldn’t know. So, I didn’t follow it up being I was in the process of moving and finding a home on Long Island. So, to begin again, I’m now trying to contact Ms Sawyer replacement on Channel 7, David Muir… More hopefully to follow….