In 1963, when I was 31, it was a very good year! I was working at “ZA”. Zunino Altman Artificial Flower Co. and I was approached by two men, Phil Mann and Arthur Braverman, who were partners developing a small publishing Company. They asked me if I would write a small pamphlet about Artificial Flower Arranging, as they thought it would be very successful, as none was as yet produced. I thought about it and then discussed it with the gift buyer at Woolworth’s who I had developed as a customer for “ZA”. His name was Arthur Conover, who much, much later, became one of my partners in a company I formed called BCY INC. He said that he would place an order for it, if, when it was finished, he thought it would sell. My new partners had an associate who they introduced to me who was also trying to publish on her own, and her name was Martha Steward. When my first draft was finished, I showed it to Arthur Braverman, who thought it was great except that it needed better pictures on each of my step by step explanations for making each type arrangement, I had designed  three, the “S” curve, the “Crescent”, and the “Traditional”. So, We set up a place in “ZA”‘s back room at 16th St and Third Ave. Then at each place where I felt an explanation would be put, I created the Step by step description of pictures that were taken by  a young man who I later worked with on my up and coming Children’s hard board books called “TUFFY” books. After all the pictures were taken, I then built a story on each to create from start to finish 3 different flower arrangements. with the final proofs, I went to see Arthur Conover who after seeing them, agreed to order enough pamphlets for those stores carrying Artificial Flowers, which were about 900 of the 2000 Woolworth Stores. so I got my first order for 6 dozen per store to start. so, I went forward and finished it but decided to use a pseudonym and so called the author Gene Taylor”, and named the pamphlet  “Artificial Flower Arranging It’s easy and It’s Fun” By Gene Taylor. While this was all happening, I didn’t know that out of his friendship with Martha Steward, Arthur Braverman was showing her generally what we were doing. We went to press, and published 7000 dozen booklets, just as a starter. I was considering going to the other large retailers to offer the little booklet to them as well, but felt Woolworth had the right to sell them first, being Mr. Conover was taking the chance of it selling well. It was at this point that I was given a copy of a pamphlet by Author Martha Steward, who had used all my designs, just changed slightly and with very close explanations, using different pictures. I couldn’t believe it and asked Phil Mann how it could happen! He said that Arthur was showing Martha how we were progressing, not thinking she would copy our pamphlet. She went to her contacts and sold her version of my pamphlet to them before I could get to them, since I held off going to them. Thank God mine was successful at Woolworths, so much so that Arthur Conover asked me to come up with another one but for Christmas this time. So back to work on a Christmas version, only this time I told Arthur Braverman not to make his same mistake twice. He said he learned his lesson, kept his word and told Martha Steward she stole our ideas. As for Ms Steward, over the years I watched from afar as she became expert in every field, pushing aside the true expert, as she tried to do to me, except in my case, it didn’t work. because of her first attempt on us, we were on to her, and kept her out of our circle. However, she worked her magic in the Gift Building and many companies were sorry they dealt with her, as you readily see today, that she’s the

In making my Christmas version, it was going to be more than just arrangements, as I had ideas on how to make Christmas tree decorations out of everyday things around the home, as well as how to properly decorate a Christmas tree with the new mini-lights sets, that had just hit the marketplace. It too was a success, and no Martha Steward version. It’s title was Christmas Decorating It’s Easy and It’s Fun by Gene Taylor

Ok! What was to follow? Now that, was going to be a tuff one! tuff, No I didn’t spell tough wrong, cause we created “TUFFY BOOKS” a year later. Somewhere, in some place, there is a set still out there. However, I do still have a very cheap watch we had made called “tuffy”. Cheap, but cute, as we gave them away when a full set of Tuffy Books were purchased! Send in the receipt and along came the watch. 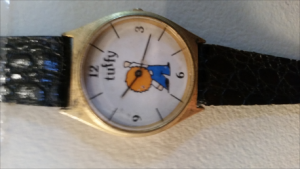