The “Annual Burning” of Christmas trees on Mulberry St

It was when I was very young, and many, many years before and thereafter, our whole family always celebrated all our Christmas and New Year holidays together, as they did even before I was born. At the end of each year, the final get together would be at Grandpa and Grandma Bianco’s home on the third floor at 250 Mulberry St. in Manhattan, N. Y. and it was very exciting as the holidays wound down, but in those days’ holidays were for adults to enjoy, not for children, as it is today. It didn’t matter to kids because just being part of it and watching, was a wonder! Getting fruit and nuts was our Christmas presents, with maybe candy as a very special treat, if we were lucky.

At the intersection of Mulberry St and Prince St there was an empty lot which was directly across from St Patrick’s Old Cathedral’s red brick cemetery wall and diagonally across from our building. This lot seemed to belong to no one, as it was used for trash and was always littered. the local kids used it to play on but because it has broken glass and bricks, it was dangerous, so most parents would not allow their children to play on it.  At that intersection, there was held each year at the very moment of the New Year, a gigantic Christmas tree burning. It began early on that same morning, with all the people living in the neighborhood bringing their dead and dry Christmas trees, with most having tinsel on them, which was a very popular decoration at that time. Because all the trees came from Canada and were cut many weeks to over a month before Christmas, by the time New Year’s Eve arrived, they were extremely dry and dangerous. ((I would like to mention here how my father would travel to Canada in late November and have his friend there, prepare a railroad car of Christmas trees for him, then to send it to New Jersey where he had all his partner/friends pick their portion of trees up and bring to their home areas to sell. It was these same friends who helped sell his grapes and thereafter his wine.      So, each year the same people would wait for his call to pick their trees up at the railroad yards located on the Hudson River banks on the New Jersey side, and I would always go with him and help, but more for the fun of it, watching these men respect my father and what he did for them over the years.

So, every family in the neighborhood would bring their Christmas trees and leave them on the lot, with the pile growing and growing. On the morning of New Year’s Eve, a group of the local men would begin to bring the trees into the center of the intersection. never caring about traffic, as Mulberry street was no place to create a problem for the locals, especially from the police. The pile would grow higher and higher, because the men made certain that each tree put on the pile was perpendicular to the one under it to allow air to reach each tree at the same time as the flames grew. They seemed to be expert at it and probably were, as it was a major privilege to help on the this step. As they were doing this, many people were still bringing their trees, and before long the trees covered all four curbs of the intersection. So now the pile grew as the men kept throwing the trees higher and higher, as the day progressed, the pile was almost to a column.  As it became darker and darker, the crowd got larger and larger. Our family had a bird’s eye view of it all, as we all watched from the third-floor corner window of our building that was facing that intersection. 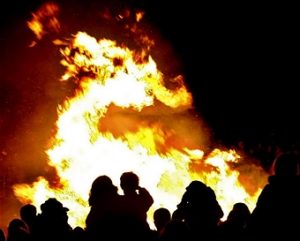 At the same time, another traditional experience was about to happen, as all the windows on the buildings facing the Mulberry Street side were opened in anticipation for the beginning of the New Year.  When it struck, from every window came flying out, last years garbage and at that very moment the fire was lit. and it was then that everyone could hear a gigantic “swoosh” sound and with it, a brightness that made it daylight for maybe four or five seconds. What followed was even more of a wonder, cause as the flames leaped into the sky, following right behind it was millions of bright star- like sparks floating up and up, and along with this was in one voice from all the people yelling through their open windows and garbage flying!… HAPPY NEW YEAR!!! At our house we had a special tradition, along with all the garbage all my uncles would pick up Uncle Tom, a very close friend of my grandfathers, and made ready to throw him out the window as well. Laughter would be wild and us kids would be screaming “Uncle TOM”… Uncle TOM”, and he laughing! Just then, everybody would grab a glass of red wine that was already poured to Salute in the New Year. No, not in Italian, as it was not allowed to be spoken in our family, as now we were Americans and English was what we yelled!!!                                                                                                         “HAPPY NEW YEAR”