Goldfarb Novelty Co., was a company bought by Josh Rothstein, after Revlon’s owner, Charles Revson, pushed him out of the company that he and his two partners built from scratch, . It was a artificial flower company called Zunino Altman. Josh and Joe Young  then asked me to leave that company and come to work for them, and get The F.W. Woolworth Co as there customer and naturally I did ASAP! Because besides being my boss, they were my friends.

After a while, working there, I was told by Joe Young to go out on my own and I did and started Sal Bianco Inc, and the beginning of my adventures. I began travelling to the Orient to design and purchased Artificial flowers to sell to retailers, and the F.W.Woolworth’s was my first. It was at this time that I was asked by Joe Young to go TO CEYLON,INDIA  to buy “T”shirts for $0.90/dozen and along with Joe Young at Goldfarb Novelty we began producing souvenir “T” shirts that had the “Logos” of Tourists locations like “The Empire State Building”, “South of the Boarder” and hundreds more . At the time, “T” shirts were only worn as an undergarment, and sold for $0.50 each. All souvenirs at that time were items that represented the actual popular location, and usually were either figures or pictures of famous attractions of that location and sold to people that visited a  locations, to remind them of their travels. Without realizing it, we started a new industry by selling “T” shirts with printing on them using a silkscreen that had holes throughout them allowing colored ink to pass through them only at places that would create a picture on the “T” shirt of the picture that is on the screen. Since I now had friends that were buyers for the F. W. Woolworth Co.. It had Stores, in many these same tourists locations, so, I was able to introduce to Woolworth’s these printed “T” shirt as cheap, colorful souvenirs. It naturally was very successful and put me in better with the company to sell my plastic flowers to all their stores. Their profits were much greater because the “T” shirts normally sold were very cheap, but now when sold as a souvenir, and much more could be charged. after a while, other souvenir companies began doing the same thing, but Goldfarb had the advantage of buying very cheap “T” shirts with the contacts I had set up. However, at the time we didn’t realize that selling “T” shirts as an everyday item had not been introduced. A large amusement company saw that beside offering “T” shirts as a souvenirs, they could offer them as bright shirts with colorful designs on them. They having the same screening facilities a souvenir companies, started offering them with LOGO’s from from different popular brands. however, now it presented a bigger problem, the companies owning the brands demanded it be stopped. So, again another industry began as the brads companies charged for the use of their brand. Some companies decided to make their own “T” shirt using their brand on them, and why stop there why not use other clothing to create another product. So, the “T” shirt idea that was for souvenirs, now became a design item for clothiers. in the meantime my business was growing and I started going in another direction with my company.

I began by going to the largest flower company in America called FTD and made holiday accessory products  for them. At Valentines Day I designed and made  in Hong Kong  “Heart Throbs”, and then at Christmas called “SUGAR PLUMS”. 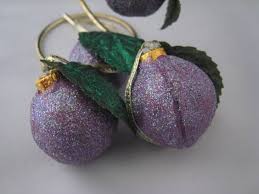 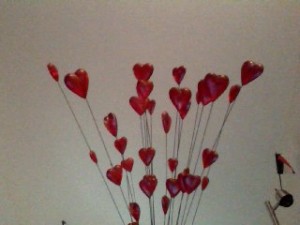 All of a sudden my reputation became known a source of products that other retailers saw I was supplying F,W,W, with products they wanted as well, so before long I was selling Montgomery Wards, J.C. Penney and later Home Depot, and others. So, I was on my way! An actual shot of