When I was young and just begining to develope my business, I was asked by a friend that was the buyer for JCPenney Co. to travel with Mr Penney and a beautiful young lady to all the new JCPenny store openings. We called her Miss Penney and although she had made advances, I had no interested, being a staunch Catholic and married. Because the promotional Department of Penney’s wanted exposure, they set up TV appearance at each new JCPenny openings, having Mr Penney and Miss Penney and myself appear. They having a canned welcome speech, and I thereafter began making my floral arrangements in containers belonging to the audience. I would begin by showing the audience what materials were needed and how JCPENNY’s new store had them in their new artificial flower Department. I then proceeded to make an arrangement and with each flower stem that I applied, I did it with a flare and sudden strokes. The small audience would laugh and eventually anticipate my next move. As I did so, they would help and every so often I’d make the attempt and stop, but the audience being off guard would shout, and then start laughing. The containers I used were from people in the audience who would rush to have theirs made, and that was the trick, because I would say don’t worry if your arrangement isn’t made here it will be at the new JCPENNY store. The trick of bouncing when I placed a new flower stem into the arrangement got better with each performance in each new store opening. One time, I had a copycat watching my technique when I was opening a store in Massachusetts, at the time I didn’t know his name, but much later I watched him on a TV show where he was a guest chef. Low and behold! Emeril Lagasse!

I would also sell a man who had started his business in the south and I sold him plastic utensils. He became a friend. Here is a picture we took in the 60’s:

Me and the Colonel 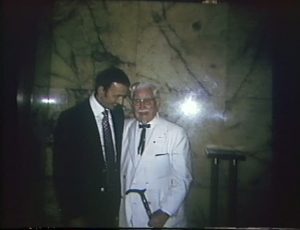