When I was about 5 or 6 years old, i would walk daily with my brother and sisters to St Patrick’s parochial school around the corner from our home that was on the fifth floor at 250 Mulberry St. The school was on Prince street and before we would get to it, we had to pass a small deli/store. As we passed it, the smell was fabulous, and better still we would look at a table set up with sandwiches on it. They were made with Potatoes and scrambled eggs on sliced white bread. We always wondered why they were on the table, but one day our aunt Millie told us they were there for all the workers who worked with her in a building next to Jersey Alley on Mulberry Street. ( I’ve written a story about that building, here is a picture of it. 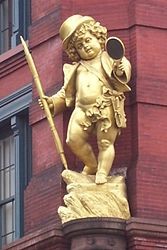 It seems all the workers would come to get a fast lunch of Potatoes and eggs, but not my Aunt, as she would go up to the 3rd floor in our building and eat with her parents and what other of her siblings might be home at that time. Her meal was usually left overs and my Grandmother thought nothing of it to give her an eggplant parm, or an artichoke sandwich on Italian bread. She would sit with her friend who work with her and they would plead with her to switch, which she did often, as potatoes and eggs was never even thought of in her family. by the way, one day while she was working on a printing press, her sleeve got caught up in the machine and pulled her fingers into it taking off the pinkey and then next and almost the rest as well. it made her stand out and it didn’t bother her at all, except she would make believe it was very difficult to pick her nose, and all would laugh. to us who passed this every morning, it was a dream… A potato and egg sandwich! No not for us, as when we went up the five flights our mother would have pretty much the same thing Aunt Milly was eating.

Today, I try to make potatoes and eggs once a week, only mine are served directly onto a plate from a frying pan that is 14″ across. no need for bread as it is just perfect eating a half circle of it 1″ thick… Mn mn mn Potatoes and Eggs!