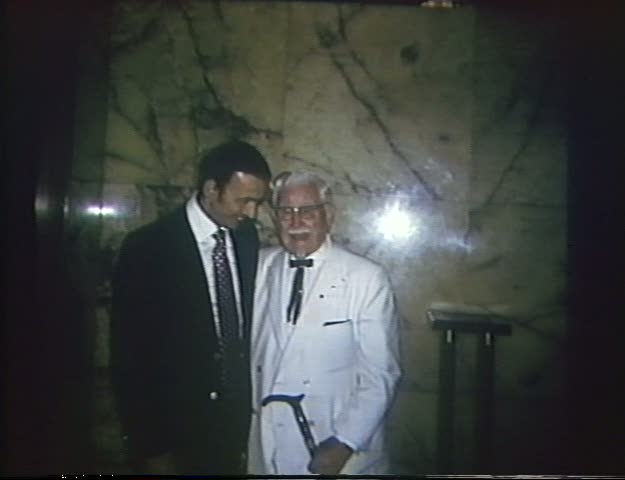 When you finally get a reputation that has retailers asking for you to source products for them, you then know you have been doing things right. In the mid 70’s, I had been supplying three major companies with products they needed. When that happens, other companies want to come on board. Some I had to refuse because of their close competition  that my customers had with them. One was Kresge’s, who had tried a few times, but having the F W Woolworths as my major supplier, I had to turn them down. One day while lounging in my regular hotel,The Mandarin in Hong Kong, with a Jack Daniels Manhattan in my hand, I was approached by an elderly gentleman asking to have drinks with him. I accepted and we had a great chat. He knew I was supplying Stoffers with certain containers used in there business, and wanted me to do the same for his company ” Colonel Sanders Chicken” He was a charming man and it was hard for me to turn him down. I told him Mr Stoffer was also a good man and had given me a chance to go into an industry I didn’t know much about, as I then was able to develop trays and clear packaging for Stoffers. However, I enjoyed his company, and we became friends. He is long gone now and his company has proceeded to use his character and image in their adds of today, however, they have made him a clown instead of the true southern gentleman he was. I can’t believe that a company would do that to their founder, but today’s world is run by finaciers and not the people working there…PROFITS are the name of the game!

Eventually, the Woolworth company closed, but maintained the other companies they had started that still were very successful., a major Shoe chain was one of them. Afterwards, I went  back to Kresge’s, now it’s name changed to K-Mart, and now the leader in their field, so I went to their offices in Chicago, Il. to now try to see if I could source for them now, due to the closure of Woolworth’s. While in their executive offices, awaiting my appointment with a Vice President, a gentleman came into the room and proceeded to shake hands with all in the room and as he came to me I recognized him… Wow! he was Cary Grant! He was truly a gentleman and made you feel comfortable in front of him, being truly the great star that he was.  Actually, he was out of his element being there, but you would never know it.

By the way, I didn’t get the K-Mart accounts, cause now they had set up their own offices in the Orient, but it still was worth the plane trip to meet this charming man. In other stories of my wonderful life, you can read about other famous men I met… for instance.. John Wayne, or Dustin Hoffman, Frank Sinatra, Imelda Marcos, and Glen Campbell and his young family while in Las Vegas with my wife and 2 sons. Or maybe you’d like to hear about my being shot at by army machine guns while driving through Hungry towards Budapest. It was at the time when it was an “Eastern Block” Country.  Stick around, there is even more coming… adventures I lived through, and to now write about!!! I’ve got over 11,000 hits on this site, so I must be doing something “Write”!