It was a just a few years after I had started my second company, BCY Inc, and my travels to the Orient became regular every three to four months. In doing so I became a regular at each hotel I stayed at in each of the 5 countries I had offices. I usually would start the trip by flying into Hong Kong first, and stay at the Peninsula Hotel, where as in all the hotels I stayed at, all the help knew me as a regular. It was, and still is, the premier hotel in Hong Kong and built in the Mid-1800’s, so it was where all the influential and well known people from around the world would stay. One time in 1977, after I arrived in the Peninsula hotel limo from the airport, I proceeded to the front desk to check in as my luggage and samples were taken directly to the same room they always held for me each time I arrived. It did help that the manager was a good friend and my Racquetball partner. 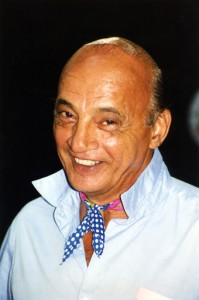 Notice the scarf? There will be another story about why I’m wearing it, and had been wearing it at that time daily for over 15 years, and still do, even now nearly 46 years later! No! Not that same scarf… but that particular one does bring up another story I’ve just thought of, involving my experience helping the CIA, and a missing secret agent working with them. It’ll be called “The Jim Thompson Story”

As I was approaching the front desk, looking like the picture above, I noticed a giant of a man was at the front desk checking in. Not being able to notice who he was from behind, and as I approached behind him to check in next, all the hotel staff that were in the area called out to me, welcoming me back. They did it, not like the normal politeness hotel staff was supposed to, but truly friendly, with laughter and amusement, one saying “Hey Mr Bianco, your Manhattan is waiting for you”. Well, this giant looked up from what he was doing, and turning around expecting to see someone special, like himself. He looked at me with a little hesitation, and confusion, then smiled, and said “HELLO YOUNG FELLA”, with that great smile he had. When I saw who he was, I too was now shocked. “Holy Mackerel “… It’s John Wayne!!! 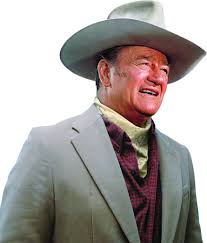 Naturally, it was hard for him to believe that no-one recognized him, but here was some nobody that was welcomed the way he normally was. He had come to Hong Kong to make what became one of his best movies…Called “The World Of Suzy Wong”. He had come there to work with the most famous Chinese actress of the time… Nancy Kwan. Before he had turned to me, I noticed that the man in front of me had on a wig, and it was slightly as-cue. However, when he turned and I recognized him, his personality took over, and I was at first socked, then overjoyed, amazed, and completely in awe. Smiling brightly, I shook his hand saying “WOW”. Now that made him very happy, and then he smiled his famous smile, and then turned back to check in. Not bad Bianco! John Wayne died a few years later of cancer, but he still lives in everybody’s mind, whether they be young, or old, but more especially in mine, as how he looked that day when he turned to me with a slight look of confusion, that only he could make.