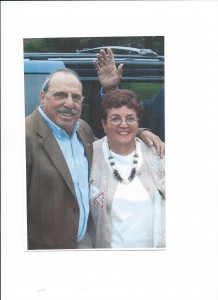 What a guy he was!

This is a picture of Al and Fran when we were on a trip to Europe. Below is a Happy Birthday wish from Cousin Maryann that I found in my old desktop computer, along with some others of her writings which I’ll post separately.

I’ll have my own version of what a wonderful person he was and how he was loved by all who knew him, but for now read this from Maryann to Al.

Memories Of “My Cousin Al”

My first Recollection of Al, was in my youth, when I was elected to babysit my cousins Al & Betty, & Eleanor, while listening to that little white Motorola radio on their kitchen counter on 60th St., Brooklyn. Al never gave me any trouble, even then.

Then as we all grew up, we went off to different areas, but always kept in touch. Al married Francesca, a one of a kind, lived in Brooklyn near his parents and sisters, and then moved to L. Island. I had previously married Lou, a brief stay in Brooklyn, then on to L. Island, where Fran & Al were only minutes away. In the meantime, we had formed a Cousins’ Club ( I was Pres.) that lasted over ten years. We were able to get together in our respective homes, every two months, we went on picnics, once a year, we went to see Shakepears in the park, in Central park, we spent Fouthof July, and many many more good and happy times all together! Al had become a detective in the N.Y.C. police Dept., and was always there to take care of all of us. Sometimes being overprotective, because of his experiences with his job.

He has a fettish for reading maps. He has every map you can think of. Just don’t ask him to take it out to see where you are (If you should be lost) As we were on our way coming home from cousins’ club, one night). His comment: I only look at map to see where I’ve been, not where I’m going! We could not stop laughing!

We shared many experiences for the first time together. I remember standing on top of the cupola in St. Peter’s Cathedral in Rome, the choir was singing, and we were praying quietly, and I looked over to Al, and he was so pensive, and said: “I’m having a religious experience” It was awesome! We went through the Sistine Chapel and after and we went through corridor after corridor, of the artwork, statues, and engineering designs of the Italian Masters, Al exclaimed on the top of his voice, as he raised his arms: This is our heritage!! This is our heritage!! His eyes filled with pride.

He became our designated driver and since we had limited language skills in Switzerland, Germany & Italy, you can understand why we were driving down, one way roads, the wrong way, but eventually getting where we wanted. Of course, Fran’s bible was “How to spend 50 cents a day in Europe” and there were times, Al would be patient, waiting for us to stay and eat, wherever we went. His patience got thin, however, when we told him to drive faster, with a small Renault and all our luggage on racks on top. Believe me he never parked the car without watching the car for one second! He would watch for us whenever we were out of sight, he would panic. The policeman’s protectiveness!

A fold is here and something is lost

I love you and admire you,

When I found this, I hand wrote:

Postscript: At the age of 70, my cousin Al passed away. He had cancer and suffered badly, but never complained. We all miss him and his……..missing!!