It was sometime in the early 70’s when my business was established and all my five offices were producing different products for my customers. I was now producing all my artificial flower in Thailand, as they were now producing my flowers in polyester plastic using the same process as in their Thai silk making cloths and accessories. I had a partner there whose family owned a lot of land in southern Thailand, in the province of Chung Mai, where they had a large lumber company in neighboring Malaysia. Their connections in Bangkok with two large flower manufacturers gave me control over what they produced. They were the Charoensub family and their oldest man asked me to buy two very special Bulls from America for their ranch along the southern coast of Thailand. When I did, they didn’t know how to repay me. Their help with the flower manufacturers was enough, but every time I arrived in Bangkok, they would meet me at the plane and drive me to my hotel. I had a suite there and guess who it was used by most of the time? Do you remember James Michener, the famous author of many books telling of the history of how many areas of America were established, from the time of only indians till settlers and so on. At any rate at that time he was the most popular author, and my partners there made sure I always had his suite, that is, when he wasn’t there, the shame was, I never got to meet him in all my time there.

I don’t remember if I’ve ever written about my being asked to wear a neck scarf from the time I was eighteen till the present day as a Bianco Family Tradition and because I did, I always would stop by a very famous store in Bangkok called Jim Thompson’s, who produced Thai Silk scarves and the like, and it still exists today, except expanded to a chain throughout Asia and America. Their products were very expensive, but beautifully handmade, in fact I still have a few that I still wear. 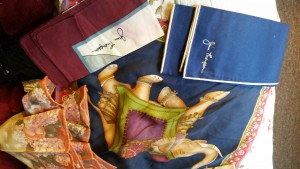 These Thai silk scarves I bought in 1977, that I still wear every day!

It was at this time that Jim Thompson, the owner, disappeared into the jungles of Malaysia. There were many Thai expeditions going into Malaysia to help search for him, as he was liked by all the Thai people in Bangkok, and it was then that I was approached by members of the CIA. They asked me if I would discreetly join in the search and report back to them, but I couldn’t let anyone know why and where I was going. I asked them…why me? They explained that because of my frequent travels throughout Asia, it gave me legitimacy to go to Malaysia and secretly search for Jim Thomson, He explained that Mr Thompson was working undercover for the CIA  to investigate what was happening with the guerrilla warfare going on from Malaysia into Vietnam, as it was creating major problems for our troops there. In fact if Jim Thompson wasn’t found, would I consider working for them to replace him.

A side note here because you may be too young and not know too much about the Vietnam War:

The Vietnam War was fought between North Vietnam and its communist allies, along with the Viet Cong gorillas, who operated throughout South Vietnam, against the South Viet Namese government and its principal ally, the United States. The conflict was also part of a larger regional battle between communism against democracy throughout all of the South Pacific and Indochina, that was primarily fueled by the Soviet Union and China on one side and the United States on the other. It began in 1954 and didn’t end until 1975. with the United States and it’s Allies being forced out.

So, with their help I organized a group using my partners and their people, to form a legitimate search. The crazy thing was when I would go into the jungle with my group, I had to be dressed in a suit and tie. Seems crazy now but it solved the problem of my moving about as I always did normally, only now I could be in a jungle. Now you would think that “Hey! This is a jungle! Are you crazy in a business suit you have to be really hot! But I wasn’t as I was more concerned at what I was trying to accomplish to worry about a little heat. After three days of looking everywhere and going nowhere, the hunt was stopped. I finished my business in Thailand and left for Hong Kong and back to just being a businessman. Jim Thompson was never heard from ever again, but his name and business still exists today, with his home and belonging maintained awaiting his return.