In the mid-seventies, I found that I had friends that needed a place to work after retirement. They were more than friends, they were the men that pushed me up the ladder to be on my own. As I said in other stories of my adventures, a Mr. Joe Young , my boss and friend made me realize that my talent and personality could make me go far in business. He was a Jewish man with a wonderful sense of humor and a love for everyone. He served in Europe in the Second World War as a US Army Lieutenant and when it was over, he found places for people who were trying to just live their daily lives. He first gave them money, then help to get back on their feet after their ordeal from the Nazis persecutions, by finding their relatives in America if they had any. He visited the camps holding the Jewish prisoners who had no other place to go but to stay at the camps, now free, but penniless, homeless with nowhere to go. He tried to get them either to America or places where they had family. (If I remember, and at another time, I would like to tell of groups of Jewish refugees that finally were allowed to come to America, and how Joe and I put them to work for me on an assembly line making bunches of grapes made out of poured plastic. Oh! Did I say that they were all Doctors and their wives, not allowed to practice in America, but still needed to earn living, as they too were penniless. I still have some of their personal Jewelry that they gave me as a gift for my help, as it was all they had to give.

Then there was Arthur Conover, a decedent from a family that came to America on the Mayflower, a true Wasp in Nationality, but a soft generous man, who helped me break into selling the F.W>Woolworth Co. big time, when he was still the CEO of there offshoot subsidiary, THE WOOL STORES, then a direct competitor of K-MART. He saw my potential with Artificial Flowers and had The F.W.W. Co. use my products and teaching talent(Another story for another time) the their 3000 stores all across America. One Item that I designed and manufactured, alone had a volume of $1 million dollars… my Boston Fern. 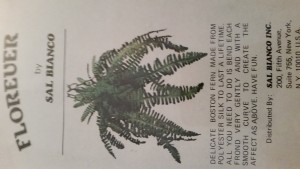 I knew that he didn’t really want to retire, so with him and Joe Young, we formed a Company called BCY Inc. Get it? Bianco, Conover, Young, and more importantly… an Italian, A Wasp, and A Jew. It did fairly well for about 5 years, till they both wanted to really retire, and did so. I truly loved these men, as they became my parents, as my Father had died recently.

So we were almost politically correct, and actually we were, cause the person running our office was, Del Carney, a black women who protected me from everything, and everyone and made the office run like a clock, me being her bent minute hand. There was also my second Mother, Beverly Zucker, Jewish, wonderful, and it was she who protected me financially, she was my bookkeeper, who also acted as my boss, but with love.

The last person in our office was Jacard Yeung, the Chinese man who helped me to begin my doing business in Asia, he was a man who was more than my worker, closer to me than any other person, except my parents. He depended on me and me more so on him. I sponsored  him and his family, all five.to become citizens in America .