in the early 30′, an opportunity came along to Bianco Bros Trucking, our family business, and it was delivering talks of bananas from the docks of New York City to fruit wholesalers…I’d like to tell you of my first experience with bananas and how we were involved. I don’t know exactly when it was begun, as it could have been my grandfather that started it, or later when my father took over running the company. Well, one day when I was about 10, when I occasionally went to work with my father on Holidays, my Uncle Tony asked me to come with him on his next run. Naturally I was excited just knowing I was going to be a helper and just so proud. Into the truck we went and he drove across town to the lower the Hudson River where there were piers that boats could dock next to, to load and unload their cargo. 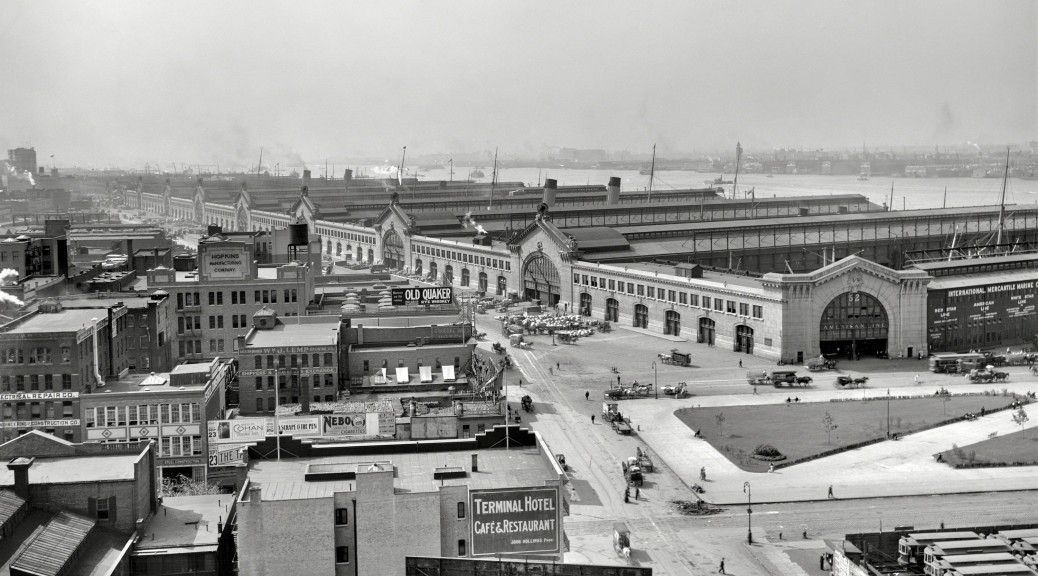 This picture was taken well before there were cars or trucks, but the piers were the same when we went there, just a little disheveled and much older.

Into the gigantic pear we went and as we moved further into it, it became darker and darker, so much so, Uncle Tony had to put on his lights, as did the fifty or so other trucks already waiting in line. We stopped behind the last truck in line and he immediately jumped out and told me to do the same. Walking up to the front of the line, he went up to a desk set up there to register, in doing so he knew the men behind the desk and with a big smile began to happily talk, but in doubletalk, which he was great at. All the guys around looked at him thinking him speaking in another language, but after a while, they all would begin to laugh knowing he was fooling them. He really was good and the best part was that he would speak as though he was asking a question. The men behind the desk would ask him to repeat it and again he would double-talk but maybe add even more gibberish. After a while everybody would laugh and laugh. Eventually we went back in our truck, and moved along the line until our turn came, where he then backed our truck onto a platform. He said to me “Come on, we have to load the truck”. Well, talk about a new experience! 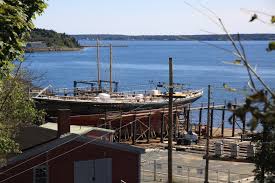 A boat being loaded to bring bananas to New York Harbour

We walked up a railed platform with just a single chain fence as a guard from falling into the water, where you could be squeezed to death by the boat floating back and forth along side the dock. It led into hole of a mid sized ship, not a liner, or big cargo carrier, but rather one that treaded between the islands of the south sea islands and then back here in New York Harbor, just to deliver bananas. Onto and into the boat I went behind my uncle, and as we went down, we passed men carrying tall stalks of bananas on their shoulders going out of the boat, laughing as they did so. Seeing me, a young kid, they yelled to my uncle, “Hey! Watch out for the big black spiders, they are much bigger this trip than the last one. I gulped, Wow! What? Well, now I really had a problem, I had to watch out for spiders, and it was getting darker and darker as we went down and down, with only dim lights flickering, here and there. Uncle Tony turned to me and said don’t listen to those guys, they’re just fooling to make you scared, but let me tell you, they did a very good job! Remember I was only 10 years old! 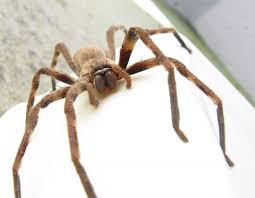 It’s not black but that’s close to what I saw!

As we went down, I noticed men who were standing near each stalk awaiting to help the next driver, who were very, very dark, who laughingly spoke in a way that sounded like a song in different language, but it actually wasn’t as I listened real hard. They were laughing and laughing as they sang, and sweating so much so, that their skin shined, even in the dark. I had seen a “colored” man only once before, and that was when my friends and I ran down Mulberry St. all the way to Houston St. to see what the commotion was about, because we heard loud yelling from people crowding all around, cheering, as they moved down Houston St, passing Mulberry, but none never so close as to be involved. When we got there, panting, we saw two guys fighting with long knives, they were very, very dark almost black, swinging their knives at each other with blood running from their bodies as they passed our street along with the loud crowd cheering them on. I say this was the first time because we lived on a street that was closed to anybody not living on it, including “The cops”. At that time they didn’t put “colored people” in books for children to see, at least not in any that I saw, but at the same time, I never really saw a true tree. So now, I was not too shocked to see these guys. My uncle’s turn came and he walked up to a stalk of bananas and swung it onto his shoulder as one of the Black men pulled on the bow of a knot on the cord that was holding it to the ceiling. My Uncle Tony said to come follow him, and this time if you see any hands of bananas on the floor pick them up and bring them with us. Up we went and sure enough there was a hand that laying there that “accidentally” fell off one on the stalks that someone was carrying. I picked it up and boy, was it heavy, with at least fifteen large green bananas on it, and crawling around one of them, came a spider that had to be as big as my hand with black fur on it. I didn’t hold onto that hand of bananas very long and certainly didn’t pick up another one.

Down to our truck we went and as we passed another manned desk that was directly along side of the ramp, they recorded our name, and weighed our stalk, so as to be able to tally and charge the Bianco Bros’s customer. When inside the truck, my uncle told me to tie the top of the thick stem of the stalk onto the roof railing of our truck with the same rope that had been left on the stalk. So onto a box that Uncle Tony had set up for me I jumped, and tie it I did. We continued this procedure time after time till the truck was fully loaded with about 100 stalks hanging there. We then closed the back doors and drove off to our customer’s warehouse that was also dark, dreary and also full a big black spiders; to do just the opposite, unload each stalk onto hooks on their ceiling. It took four hours from start to load till unloading, so back for another load, but this time Uncle Tony said that I had better pick up the hands that fell, as they were our tip, that we would then share with all my uncles, as well as the mounted policemen that hung around our office  on 14th St. and Eleventh Ave, to have coffee and and fresh fried meat. This too, is a story for another time, or you might read my story about Uncle Joey, that explains our Policeman friends.

A note here… Do you remember: I’m Chiquita banana and I’ve come to say Bananas have to ripen in a certain way When they are fleck’d with brown and have a golden hue Bananas taste the best and are best for you You can put them in a salad You can put them in a pie-aye Any way you want to eat them It’s impossible to beat them But, bananas like the climate of the very, very tropical equator So you should never put bananas in the refrigerator